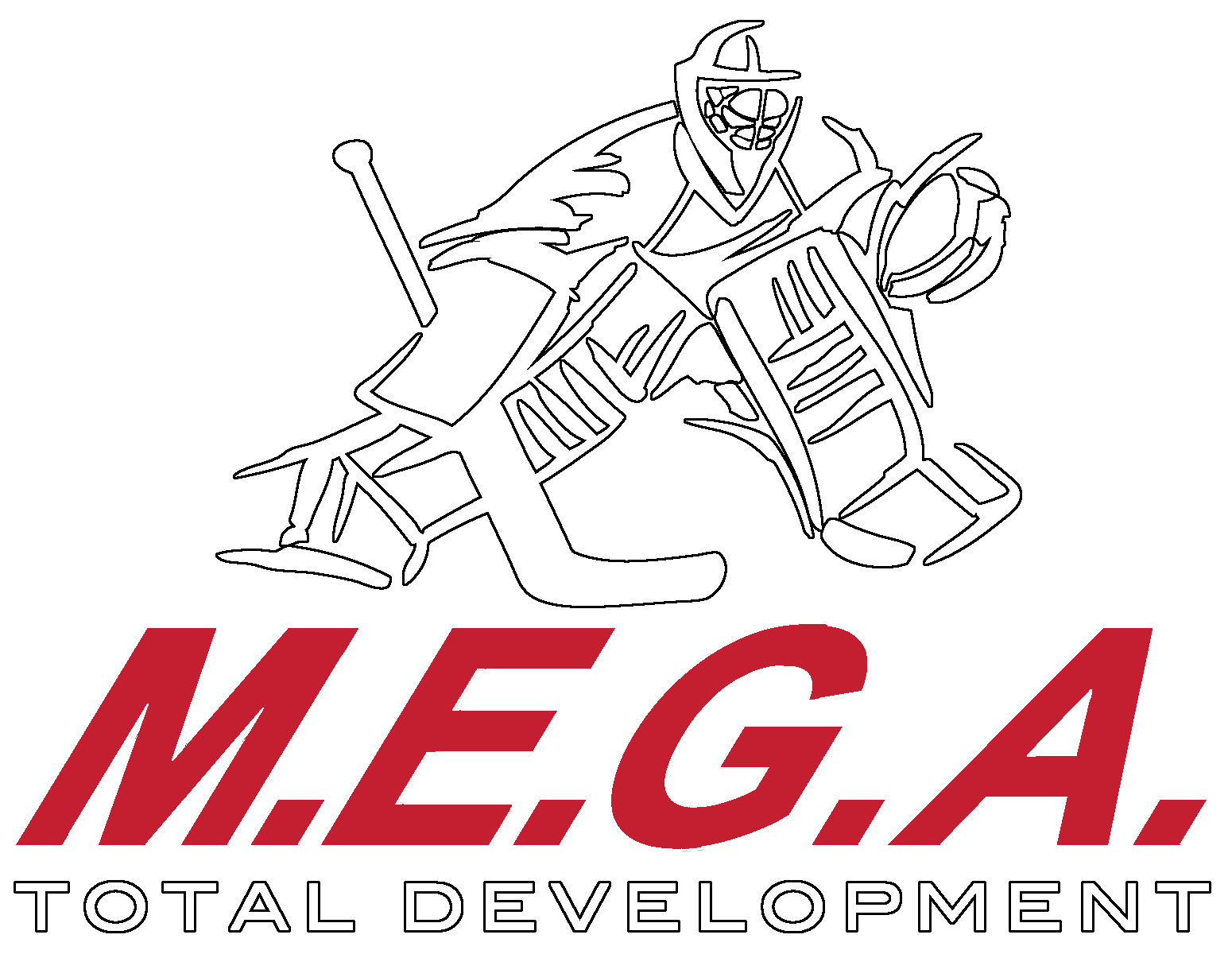 When participating in MEGA programs you can expect to learn not only the most current methods of goaltending but also give you the time and repetitions to discover which methods work best for you.

In addition, MEGA coaches are passionate about developing the type of mental skills that will not only serve you well in the crease, but later in life as well.

Connect with us on social: 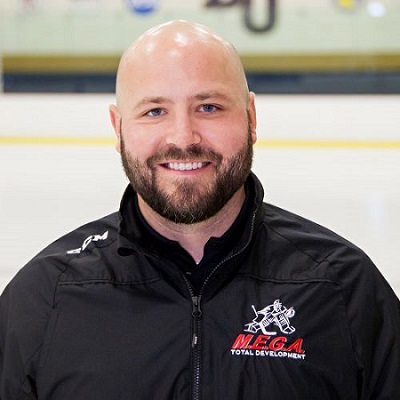 Andrew grew up playing youth hockey in Lakeville, MN. Graduating from Lakeville High School in 2002, Andrew went on to play junior hockey with the Twin Cities Northern Lights, where he was selected as an All League Goaltender. Kent continued his playing career at Augsburg College in Minneapolis.

Kent was a four-year letter winner at Augsburg, playing from 2005-09. Kent was an M.I.A.C. All-Conference award winner in 2007 and earned M.I.A.C All-Conference Honorable Mention in 2009. He was also an assistant captain for the Auggies as a senior in 2008-09. Kent graduated from Augsburg in May 2009 with a Bachelor of Arts degree in business administration and a minor in management information systems.

Along with his playing experience Kent brings a wealth of coaching experience to the MEGA Goaltending staff. Currently Kent is in his second season as the goalie coach of the U of M Gopher Men’s hockey team. Kent started coaching with the Gopher Men’s team in 2017-present.

Kent returned to Augsburg College in 2013 and served as the goalie coach for their men’s team (2013-2017). During his 4 years coaching with Augsburg his goalies received awards such as All American and All Conference. During his time there the team enjoyed a lot of success as well winning MIAC league regular season championship (2016) as well as winning the MIAC conference tournament in back to back seasons (2016 & 2017).

Kent also coached in the 2014 Sochi Winter Olympics Games for the Women’s Finnish National team. Along with coaching in the Olympics Kent he has also served as the boys’ assistant coach at Roseville High School (2011,2012) and consulted with various teams, associations, and camps ranging from the youth levels up to Professional Goalies.

Kent started coaching with MEGA in 2010.  Andrew has taken this extensive experience, both as a player and as an instructor, and developed some of the most effective techniques for developing both young and experienced goaltenders. 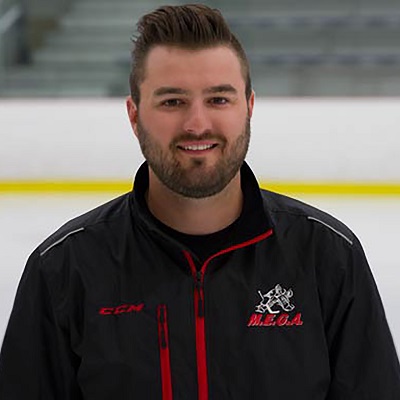 Anders is a 2012 graduate of Elk River High School where he played 4 years of varsity hockey for the Elks. As a freshman, Franke was named to the USA Warren Strelow National Goalie Development Camp for his birth year. He was a 4-time All-Conference winner and All-Metro goalie of the year his senior season while playing for Elk River. Franke also holds the record for most career starts and all time wins for Elk River High School. After his 4 years of high school hockey, Anders decided to take on the junior hockey route.

Anders played 2 years of junior hockey in Flint, Michigan following his High School career. During his two seasons with the Flint Jr. Generals of the NA3HL, Franke received honors for Goalie of the Year and 1st Team All-NA3HL in his 2013-2014 campaign with the Generals. That same year, Anders brought the Generals to a Tier 3 National Championship played in Hartford, Connecticut. After 2 seasons in Flint, Franke committed to play college hockey at Saint John’s University (NCAA – D3).

Anders brings a young mindset to the table from his extensive playing career and experience from coaching at the youth, high school, junior, and college levels. His effective techniques and aspect of the game bring another element to the MEGA Goaltending staff. 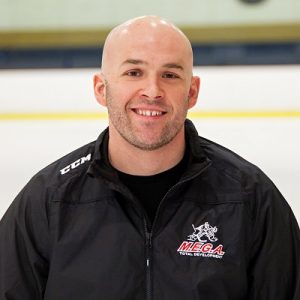 Next, he played college hockey in the NCAA for Northland College. He majored in business management, minored in coaching, environmental economics and made the all academic team twice.

Finally, Justin went on to play professional hockey. He played three seasons of class A and two seasons of AA. He attended main training camps and played for teams in the CHL, IHL, SPHL, AAHA and AAHL. 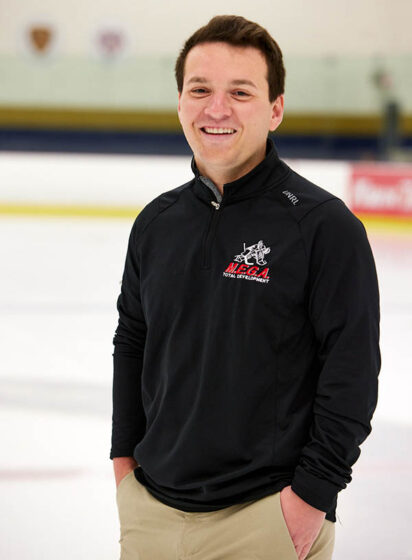 Ryan Dop was born and raised in Columbus, Ohio. He played AA and varsity at his Olentangy high school. Ryan began his goaltending coaching career shortly after graduating high school beginning with the Ohio State club hockey team (ACHA Division II) for two seasons while winning a regional title before graduating from Otterbein University with a degree in business administration. Additionally, Ryan was the director of goaltending for the Columbus Capitals and the Columbus Chill 18U AA, elevating goalies to level up in their careers. He has coached every age group from mite to college in the last seven years and is a level 5 USA hockey certified coach. Ryan brings passion, energy, and an undevoted love for the game and position to bring out the best in players at MEGA. 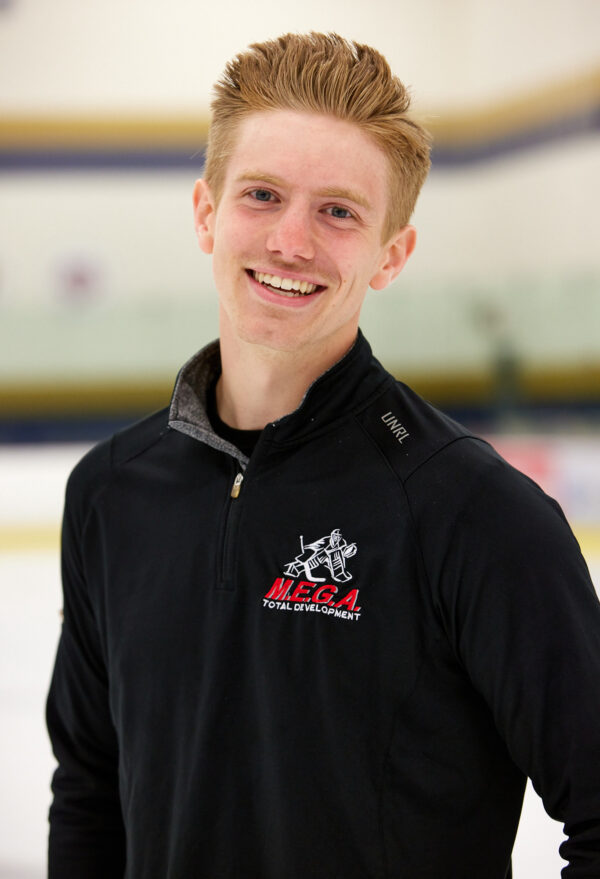 Danny Fraga grew up in Plymouth, MN playing for the Wayzata youth association.  While at Wayzata, Fraga was selected to represent Minnesota at the USA national camp. He went on to play highschool at Wayzata as well where he would go on to be the starting goalie his senior year. After his highschool playing career Danny went on to play for the Kenai River Brown Bears (NAHL) based out of Kenai, AK. After his junior career Danny ended up hangin the skates up.

Fraga has been a coach for 4 years now, spending time coaching various goalie camps in the summer and the Wayzata youth hockey association in the winter. This is Fraga’s second year being a Goalie instructor at MEGA West. 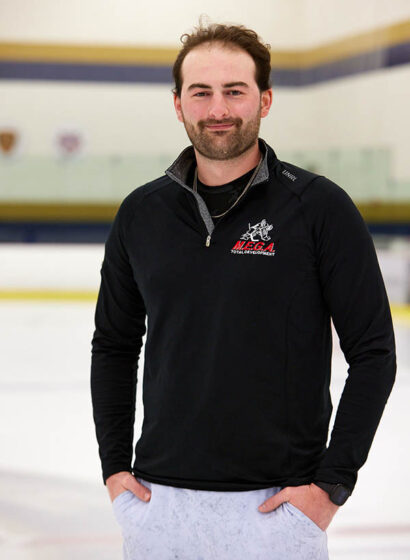 Tyler Johnson is an Amherst, N.Y. native and played youth hockey for the Amherst Knights and the Buffalo Regals. At 16, Tyler began his junior career in the OHL for the Plymouth Whalers. In the 2015-16 season Tyler made his debut in the NAHL (Topeka) and the USHL (Chicago) before playing for the London Knights and the Soo Greyhounds (OHL). During his time with the Soo he was the co-recipient of the Dave Pinkney award for fewest goals against in a season. Upon returning to the United States he bookended his junior career with the Lincoln Stars and the Fargo Force (USHL).

Tyler started his collegiate career at the University of Windsor in 2019 and went on to play professionally in the AHL in 2020-21 and the ECHL for the 2021-22 season. Tyler has coached within the Minot Youth Hockey Association alongside MEGA Goaltending and looks forward to developing youth goaltenders in Minnesota while helping them grow on and off the ice. 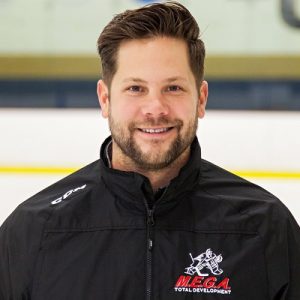 Justin Johnson has been a hockey goaltender for over twenty years. He grew up playing in the Blaine Youth Hockey Association through High School where he set school records, participated in a State Consolation Championship, and was elected All-State Honorable Mention in 1999. After two years of competing at the junior level, Justin went on to play at the Division I level for four years with the University of Minnesota’s Golden Gophers where he was selected for the 2003 WCHA All-Tournament Team, and was a two-time National Champion in the years of 2002 and 2003.

Justin graduated from Minnesota in 2005 with a major in psychology and was a member of the WCHA All-Academic Team, a U of M Scholar Athlete and a three-time recipient of the Donald M. Clark Community Service Award, for his active role within the community. After graduation, Justin joined his longtime mentor Shaun Goodsell as a performance coach with Mental Edge, whose goal is to help athletes develop the life skills necessary to deal with the pressures of competition and help them climb through adversity with focus and discipline. In 2010 he combined his expertise gained through this experience and launched the Minnesota Elite Goalie Academy (MEGA)

Justin currently serves as USA Hockey’s Minnesota District Associate Goalie Coach in Chief and is in his seventh year as the goaltending coach for the U of M Men’s program. During his tenure as a colligate coach, which includes three years at St. Cloud State University, he has coached Hobey Baker Finalist Bobby Goepfert, Patty Kazmier Finalist and Olympic Bronze Medalist Noora Raty. In addition he has coached NHL Draft Picks Jase Weslosky, Dan Dunn, Alex Kangas, Kent Patterson and Adam Wilcox. Justin’s on ice coaching experience also includes over 15 years with various camps including US National Development Camps.

Over the years Justin has developed an ability to work effectively with goalies of all ages and athletic goals. Because of Justin’s highly competitive and elite athletic background and also his personal experiences overcoming adversity in his athletic career. His ability to combine expert understanding of the demands of goaltending physically and psychologically gives him the edge in working with goalies of all ages and backgrounds.